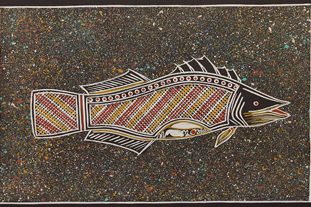 Australians have been eating Barramundi for centuries, dating back to the Dreamtime. In fact, the word ‘Barramundi’ is derived from the aboriginal word for ‘river fish with large scales’.

In the Dreaming two lovers who are not allowed to be together according to tribal law, run away together. They are pursued by the tribe and finally, with their backs to the ocean, the young man casts his spears at his people, while the woman makes more with the sticks and stones at her feet, binding them together with her hair. When their resources run dry, instead of facing retribution at the hands of the angry tribes’ people, the two clasp each other and enter the water, expecting either death by drowning or shark attack. Out of compassion, the Great Spirit intervenes and transforms the couple into Barramundi so they may stay together eternally. (Source: Bozic, Sreten. “Aboriginal Myths” also H. Rule & S. Goodman, compiled by. “Gulpilil’s Stories of the Dreamtime”.)

Throughout their life, each Barramundi is both male and female. They are all male when born, then transition into females after 3-4 years. In this sense, the above story holds true, with the man and woman never being separated!

Barramundi really are a fascinating fish, they are able to live in both freshwater and saltwater unlike many fish. The reason why they must be able to do this is they travel from the ocean where they are born, up tidal rivers to freshwater streams where they grow to maturity, then they return to the ocean to breed and repeat the cycle.

And while Barramundi were traditionally speared and roasted over hot coals, after western colonisation occurred we began experimenting with new methods taken from around the world to prepare this delicious fish. As Chef Alejandro says, “Barramundi has a great mild flavour that takes on additional flavours without being overpowering.” This enables Barramundi to be used in a huge variety of modern cuisine, some of our favourite recipes are listed here .

Manage Cookie Consent
To provide the best experiences, we use technologies like cookies to store and/or access device information. Consenting to these technologies will allow us to process data such as browsing behavior or unique IDs on this site. Not consenting or withdrawing consent, may adversely affect certain features and functions.
Manage options Manage services Manage vendors Read more about these purposes
View preferences
{title} {title} {title}